Yes and no. Both games are played with standard pickleball paddles and a regulation outdoor ball, but Sandy Pickle is played on the grass or sand. While many of the rules remain the same (or at least similar), the primary differences are outlined below: 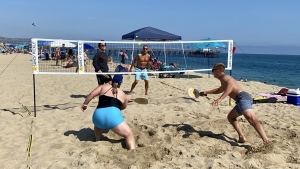 Besides the fact that players can’t move as fast on grass or sand as on a hard court, with no bounces every shot is a volley. 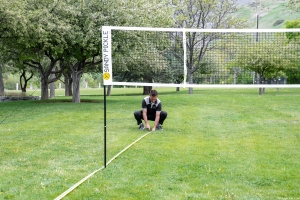 As noted in #1, every shot in Sandy Pickle must be returned without a bounce. Our first discovery as we began testing at the standard pickleball net height was that kill shots were far too easy and the net needed to be raised. 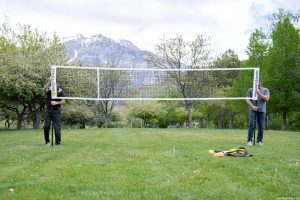 As we invited players of various heights to play our evolving Sandy Pickle game, we determined that the net should be set to the approximate height of the tallest player on the court, thus minimizing the spiking advantage of taller players. Our patent pending telescoping net system was designed to allow for easy height adjustments.

*For tournament play, the default height is 6’ but may be modified to accommodate for optional height and/or skill divisions.

The area within 5’ of the net on each side is called the “No Spike Zone” (similar to the “Kitchen” in pickleball). 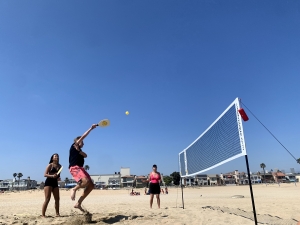 On each serve, the return must be made from behind the no spike zone line*; At all other times, the only restriction to playing inside this area is that spiking is not allowed inside the boundary. When playing inside this area, the contact point between the paddle and the ball can be no higher than the top of the net, with the resulting trajectory of the ball being either upward or flat; a downward ball path results in a fault.

*Note, the no spike zone extends upward from the line, meaning that if the paddle and ball contact point is above the net, that contact point must happen behind this imaginary plane.

Did we mention that pickleballs don’t bounce well on sand or grass? During the later stages of testing, we realized that in the fast-paced exchange of shots, there were plenty of mis-hits that stayed in the air long enough for a teammate to send the ball back over the net.  The suggestion was made that we try allowing a pass, whether or not the second shot opportunity was intentional. 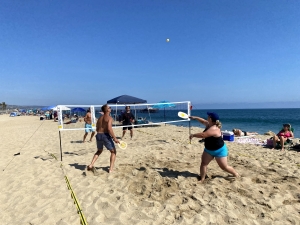 The addition of the 1-pass rule is now an official part of the game, however, it applies only in doubles play. The resulting longer, volley-only rallies make this already fast-paced game almost as fun to watch as it is to play!

Serves are made from behind the baseline on the right hand side of the court (similar to volleyball) with no limitations as to which side of the court the serve is hit to. The non-serving partner plays the left (“backhand”) side of the court; teammates switch positions when the serve returns to their side after winning a defensive side-out. The player serving continues until they lose a point, after which the opposing team takes over the serve (in Sandy Pickle the serve alternates sides at the end of each players serving opportunity, unlike pickleball in which both teammates serve before a side-out). 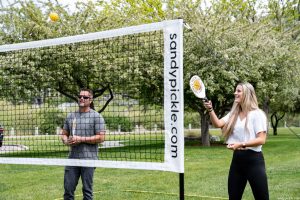 Scoring Note: When a team is winning 7-6, for example, the player serving would call out “7-6” rather than “7-6-1”. For experienced pickleball players, three-digit scoring calls are routine; for most of everyone else, the confusion warranted simplification in the official Sandy Pickle rules.